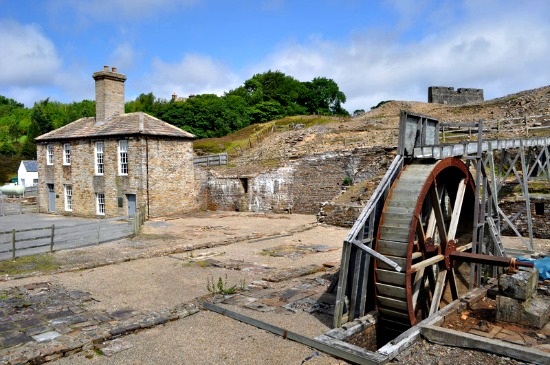 The Nenthead mines are a typical reminder of the UK's industrial revolution, and its supporting village was one of the earliest purpose built industrial villages in Britain.


The mines have been producing since 1737 when George Liddle built the first smelt mill here. In 1861 the mines were at their peak, with some 2000 people living in the supporting village, and the vast majority of those worked at the mines. At the time the mines were ran by the London Lead Company who invested a higher than normal amount of the profits on improving life for its workers.


The village was the first in the UK to have electric street lighting, and a washhouse and baths were built along with a school amongst others.


The mines closed down in 1861 and most of the village up and left soon after. There has been some recent interest from a Canadian company who have detected huge amounts of Zinc below the village itself, but drilling to confirm the amount could take several years.


Today the site is open to the public as a tourist attraction and offers tours of the mines.

The mines may have well been amongst the best mines to work in at the time in the whole country, but that doesn't mean that there wasn't still a huge risk.


There simply wasn't a mine of this size during the 18th and 19th centuries that didn't see a number of deaths. Cave ins and lethal gases being released caused many deaths in places such as this.


All of the spirits in the mines are believed to be past miners, with all of the apparitions being seen wearing mining gear. There are also a number of bodies within the mines which were not recovered and are still in the caved in tunnels. Things like this are thought to be responsible for the hot spots which can be found where activity seems to get, stronger.


Most of the reports include things like strange sounds and voices coming from empty tunnels, but there area  few claims of people who have felt a ghostly hand on their shoulder, or the feeling of being brushed past or even pushed. All of these types of reports seem to come from the deeper areas of the mines which are only open to the public on special tours or activities, such as caving groups.