My Introduction to Demon House 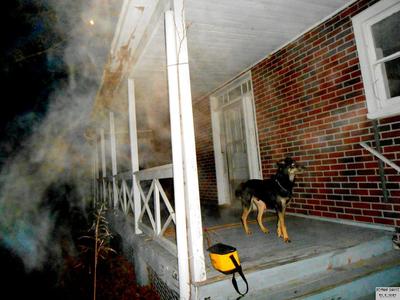 I moved to a small town in the Shenandoah Valley from Michigan in 1985. Many Many things have history as coming through here including the French and Indian war and most recent the Civil war, With the Civil hot and heavy in the area most research runs into a dead end because most records were burned during the Civil war on both sides.

Anyway back to my story, About a 15 minute walk from my home sits an old farmhouse way off the main road, I did a little research and found it had been built in 1923.
Over the years and driving by the old house I had seen it bought, sold, rented and abandoned. People would move in only to leave within a month almost every time. This house seemed to call my name every time I passed it and as a Paranormal Investigator I knew all the classic and not so classic signs of a haunted house so I started asking some of the older folk around town about the home. Not being from around this area people just kind of gave me the cold shoulder, never saying anything about the home. Every time the house emptied I would make plans to check it out, only to have families move back in it.
That was until the day after Christmas 2010, I talked a partner of mine to come to the house with me. It was still early in the day maybe an hour before dark went we got there, as soon as I stepped out the car I was hit with a blast of cold air just full of emotion, like a 100 spirits ran right through me at one time. Right away I knew I had picked the right place and I would be there investigating many many times. As we walked around the house I noticed the back door and screen door wide open along with a couple windows, I don't condone trespassing and ask you to never do it, but I have been at this for 25+ years. I took it as an open invitation to go inside and take a look around using the excuse I may want to buy the place. As we walked around the ground floor of the home (two story home with a half dirt basement) it seemed brighter and lighter in there then it was outside, I thought this strange because of what happened to me outside the car and the people I have seen come and go. We wondered around and finally made our way upstairs to what seemed to be the master bedroom. About 2 foot all the way around the room had been painted, and 3 or 4 cans of paint still sitting around with the brushes setting on top of the open paint, Strange?I looked and felt and all was dry, from the floor all the way to the paint in the buckets and the brushes were hard. On one side of the room the whole wall had a closet with louvered bifold doors and all were closed, the first one I opened revealed what looked like blood all over at the one end, maybe like something had been sacrificed in it.Other then that all the upstairs was as bright as the downstairs. I sat down on the floor with my voice recorder asking question after question while my partner wondered around the room taking pictures. After awhile this all was getting boring and I admitted the feelings I had may have been all wrong (Unusual) and started telling my partner a couple short jokes, she was standing over by the door of the room with my last joke and all of a sudden we heard from down the hall a woman giggle or cackle, my partner almost jumped right out of her pants and ask if I heard that,
I told her sure did and asked what she had heard to confirm my own understanding, she said she heard a woman laugh, I told her I had heard the same but also said the laugh didn't seem to nice, more like an evil cackle and she agreed. Tried and tried to get her to repeat herself or say anything for another 30 minutes and nothing, by now it was dark outside but the old house was still bright and lit up we didn't even have to bother with flashlights. We made our way back downstairs and decided to take a few more pictures before we left.
I was by the door we came in at the bottom of the steps in what looked like the hallway and my partner walked down the hallway and disappeared around the corner, I was looking around when I heard my partner let out a shallow scream but not very loud, I turned to look and what I seen was hard to describe, a black mass, not a figure but blackness, blacker then night was coming down the hallway toward me, from the floor to the ceiling consuming all the light in its wake and leaving nothing but darkness behind, nervously I threw my camera up and started snapping pictures while this blackness was coming at me. I snapped 4 pictures before it surrounded me then all of a sudden I felt 2 large hands hit me in the chest so hard it knocked the wind out of me, both my feet left the floor and next thing I know I was on the floor with my back against the wall about 5 feet from were I had started, my partner come flying by me and out the door and I wasn't far behind. When we got in the car she asked why was I in the floor, I told her when she screamed I looked her way and asked if she seen the black mass, she said she did and it just drifted right past her, when I showed her my chest were that mass had hit me she about lost it.
All 100% true, and have done many investigations there. The second night was crazier then the first. Just let me know if you would like to hear about that. I have been there now for over 2 years, and have more then 60,000 pictures and over 600 hours of recordings.