My friend is cursed. 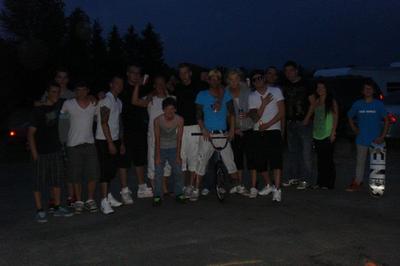 ORB on friend in between me(blue tshirt, yellow hat) and person wearing sunglasses and black hat

Ive known this friend since i was in grade 6, im 23 now. he's always seemed like he was bad luck, bad things would always happen when your around him and he's a very negative person in general. I try to keep him upbeat about a lot of things but he will always find a way to think negatively about stuff. I'm not going to go too much into detail about this part, but me and my other best friend kory have been put thru terrible stuff while being with him. mostly in vehicles. but also other places. i sold him my first car about 4 years back, the car was in great shape, he was driving it with his girlfriend at the time, he ended up flipping it over into a ditch coming off an exit from the highway. the car rolled three times. he said when he got out of the flipped car, that there was a gold cross in the grass. him and his girlfriend were fine. not too long after, his girlfriends cousin died in a bad car accident. they broke up. he got a new vehicle, an SUV this time, and when him and my other bestfriend kory were stopped in an alley, two men jumped in the back seat and held knives to their throats and ended up stealing their belongings as well as the SUV. luckily my friends got away safe. my girlfriends mom recently died in a bad car accident as well. I'm starting the get worried about my friends negativity and after seeing the photo attached, led me to some serious thoughts. its a photo from my birthday this year june 2012, im the one wearing the bright blue shirt in the middle, with my two best friends to the right of me. the one who flipped the car is standing in the middle of me and kory and there is a big orb right on his head. it doesnt appear to be like the ones that you've shown on here that represent dust reflections or moisture. it looks like the other ones, the orbs with small tears in it almost like a web when u look close it is definitely not a solid orb.