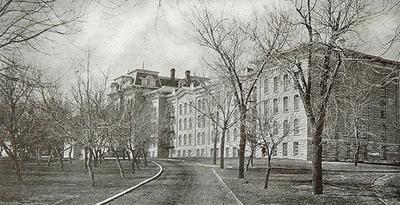 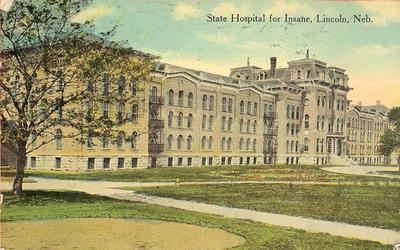 There is an old asylum that was built in the 1800s and has been abandoned for decades. The insane asylum has been, as of late, torn down..my sister, some friends and I all went to it before it got torn down in 2006. We had to run across a large field through a bunch of trees to hide from the prison guards that often check up on it. We had to climb a two story barbed wire fence because there was train carts stacked up all around the fence. When we finally got inside the fence, we looked up at the building trying to see where we were going to enter the building. We all looked up at the very top middle window because there was a light on and you could see a shadow of someone walk right by the window. We thought there were other kids here exploring because it was a pretty popular place to check out if you were athletic enough to enter. We had to go all the way around the building to the back and climb up to the second story where there were holes made for people to climb in, probably made by other kids. When we got inside, there were holes in the floor where some of the building had collapsed. We went looking for other people that might have been the shadow we saw..there was absolutely no one else there that night. We went all the way to the basement where the cells were and found these weird chairs that had metal wrist holders with sharp screws sticking in toward where the wrist would be..I picked it up and it had old crusted blood on it. It was said that the patients were tortured there and that is why it was shut down..It has since been bulldozed down.