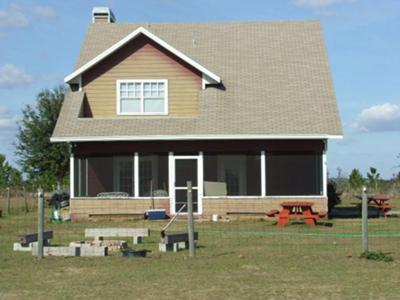 
In a medium size 2 story house my little sister started saying this name "Blair". She said, "Sister Blair is up in the tree." So i used to look outside and there was never anything up there, then one day i guess Blair decided to come inside.

She always used to stay in different places like under my bed or on a ladder in my little sisters room and in my closet.

Some days my little sister got into trances and we could not get her out of them i used to slap her and she would still be in it thats what really scared me.

Then later on my mom and my friend were talking about Blair again about the killing thing and then the lights flickered on and off again. A little while later i noticed on my walls there were hand prints like someone slid there hands down my wall and i never touch my walls then we found hand prints on my ceiling and like someone was spinning with mud on their hands but i couldn't reach that high and the hand prints just got closer and closer to my bed.

Then one night my T.V. turned on and off then something fell in my closet and i got up and looked and my whole shelf fell and broke, then when i went back to my bed and laid back down.

there was a indent in my bed as if someone sat on my bed and my bed rocked like someone just plopped down onto it then all of a sudden it got freezing.

Then that weekend my friend came over and she went downstairs and she saw a dumptruck in the middle of the hallway and she tripped over it and when she came back it wasnt there but then when she went back down stair it was on the stairs and she didnt put it there and then she went into my room and she said im sleeping with you because i am scared so i said ok and then moved over.

then she woke up in the middle of the night with my radio blasting loud and she woke me up and asked me how to turn it off then so i turned it off then went back to bed then a couple minutes later my friend woke me up and said did u hear that and i said no and then all of a sudden a water bottle on my dresser flew across my room.

The last time i heard of blair was when the girl next door talked about her because she saw her to. that was right before we moved from there to this day i still remeber her. But suprisingly my little sister doesn't.