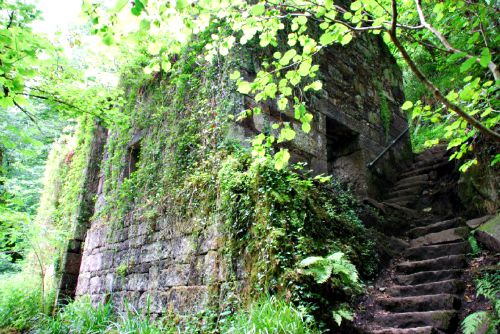 Brief History of the Gunpowder works

The Kennall Vale Gunpowder works started production in 1812, after only a few years construction. The business produced high quality gunpowder to be used in the Cornish mining industry and was immediately a success.


The works made huge amounts of gun powder using a total of 48 water wheels at its peak, spread across several acres of land and comprising of dozens of buildings. It reached its maximum production levels in 1860 when it employed a total of 50 men.


The works continued to operate until it started to decline during the 1880's when more sophisticated explosives became available, such as dynamite.


The works eventually closed down in 1910 since the demand for gunpowder dramatically declined and the buildings stood abandoned, with no one else even bothering to purchase them since they were set up for a very specific function. The site stood empty until 1985 until it was leased to the Cornish wildlife trust who declared the area to be a nature reserve.


Today the area is still a nature reserve and the remaining buildings were listed as a scheduled monument in 1999 and are of course open to the public.

The ghost stories that come out of this place all seem to go back to one source, and that is the accident that happened here in May of 1838.


The works were operating as normal when somehow one of the mills blew up as it was grinding powder. The explosion was so great that the blast ignited the next mill until a succession of 5 mills blew up. The blast was so large in some of the mills that a piece of roof from one of the buildings was found 1 mile away in a field.


Even though there were people working the mills that day there were no immediate fatalities. However one man was badly injured and later died of his wounds, leaving a widow and ten children.


Below is a piece from a newspaper which reported on the accident after it happened:

"Five mills blew up in succession, and part of a roof was found a mile from the premises. The reports were most terrific and created the greatest alarm over an extensive tract of country,"


As for actual hauntings the sole spirit responsible is thought to belong to the man that died from the blast. People have reported seeing his apparition around the buildings, most often being described as a shadowy figure with dark, hard to make out features, and there are even a couple of claims of him touching people who enter the buildings.


Apart from this a strange presence can be felt through out and orbs are very common around the ruined buildings, with some being very bright blue and yellow colours.