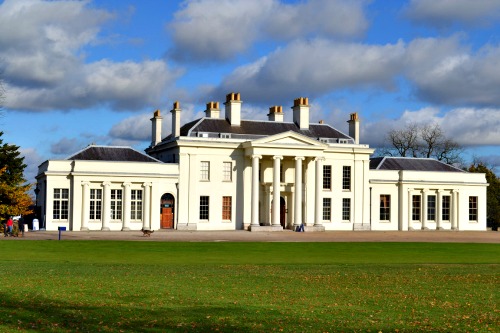 Hylands house started out life as a "show off" home for wealthy local lawyer named Sir John Comyns. He purchased the existing manor on the grounds and commissioned construction of a new, more suitable house for a man of his standing, and the end result was a two Storey red brick building in the architectural Queen Anne style.

After the house was passed through family members a couple of times it eventually landed in the hands of Cornelius Kortright who created designs to heavily alter the gardens and add the white stucco to the outer walls, as well as adding both the east and west wings. He moved his ever expanding family to another estate which was big enough to hold them all and the house passed to a Dutch banker named Pierre Cesar Labouchere, who finished the plans of the previous owner and also added a few of his own features.

The last private owner to live in Hylands house was Christine Hanbury who died in 1962. Four years later Chelmsford Borough council bought the park and it opened to the public just 10 days later. Today the grounds are open to the public and since 1996 it has hosted the annual V festival, as well as staring in various films and shows.

Who the ghosts are and why they wish to linger here is unknown, but one things for certain and that is the house definitely has some paranormal activity going on. Most often witnessed by staff, the apparition of a tall man wearing a long Victorian coat and top hat has been seen on the first floor landing, though there are no guessed to who he may be since the house had 9 different private owners before being passed to the local council.

The cellar is said to be one of the main hot spots for the house, with muffled voices being heard coming from the room when it is known to be empty. During world war 2 the estate was used as a German prisoner of war camp and there are stories about the cellar being used as the "interrogation" area.

As for use during wars the estate was also transformed into a military hospital during the first world war, which may explain why people have claimed to have seen nurses wandering through the hallways.

There are many other stories of what people have claimed to have seen and they are quite numerous. They include the ghost of a young girl who appears in the drawing room when the piano is being played, and an angry male spirit in the library who has been said to touch various guests who enter the room.

Whenever a location which is thought to be haunted receives massive popularity the tales of what people claimed to have seen always increase, so a lot of the tales of this place are likely hype, but some of them do seem to pop up on a regular basis, prompting thoughts that maybe there is something otherworldly that chooses to linger here.