His Heart Is Still Here : Merlin The Orange Tabby 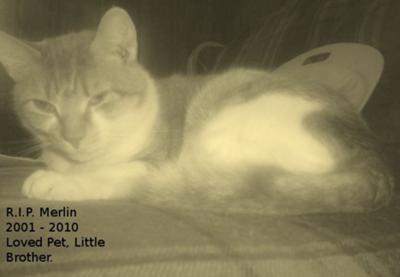 This is a picture of Merlin I took back when we lived farther up north.

Last year in September, my beloved orange tabby, Merlin, had become sick and died about a week later. Merlin was a lot like a little brother to me. The very next day, Merlin was cremated and we had kept his ashes on the family alter with other memorials we keep of deceased family members. (Only about 4 memorial papers and one pendant with my Aunt's ashes. )

It was close to Samhain and I was about to go to sleep. Just before I fell asleep, I felt very light paws going into my pillow above my head with the same hesitation Merlin had. I had remained absolutely still. When he came around, I opened my eyes and looked to my left. I had seen Merlin walk down my bed then vanish a second or two later. Right after he had vanished I sat there in silence, processing what had happened.

"Mom!" I walked to the living room where she was. "Mom, I just saw Merlin!"

"It's not much of a shock," She said calmly. "Around Samhain is when spirits are at their peak of strength."

That wasn't my first time.

After we had moved about a half hour away from the old apartment, I was just about to go to bed. And this was recently. I felt the same paws lightly going onto my pillow with the same hesitation. I had felt him walk around. This time, I didn't see him however.