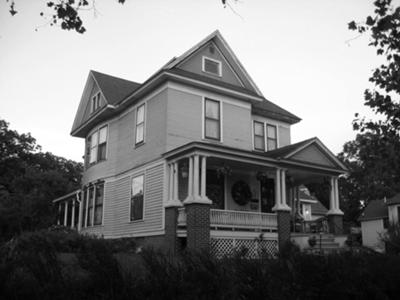 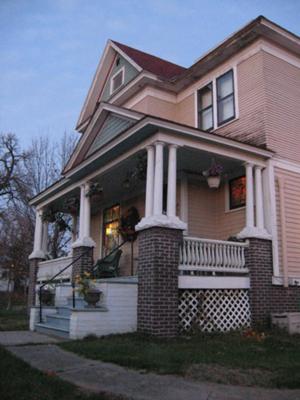 In 1900, a five story brick apartment building, named the Coronado, rested on the property at 20th and Center Streets in the Sherman Hill neighborhood of Des Moines, Iowa. It is on this lot that Hill Top Manor sits. The area was platted between 1877 and 1882 and was a mixture of Victorian and Queen Anne style mansions, bungalows and businesses.

Less then a century later, much of the area fell into disrepair and the Coronado deteriorated. Many of the once beautiful mansions in the area were cut up into low rent apartments and by the 1960’s and 1970’s, the Sherman Hill district became a place that most people avoided.

The years had not been kind to the apartment building. Outdated antique iron fire escape ladders clung vertically to the building and the hallways were covered by old carpeting. Cockroaches lived side-by-side with the human inhabitants.

In 1977, an alcoholic tenant at the Coronado set a fire in his second floor apartment; he had been known for starting other fires, but other tenants were able to extinguish those. But, not this time. It soon raged out of control and quickly spread down the hallways and engulfed the floors above. Five tenants would die; a mother and her child burned to death and three others died of smoke inhalation!

The fire starter, Ronald Veverka, would later be found guilty of first degree murder and sentenced to FIVE life terms in 1977. Although the Iowa governor set him free in 2007, his freedom wouldn’t last long. Veverka died almost a year to the day of his release.

The Coronado Apartment building was demolished in December of 1977 and for almost two decades, the large lot sat vacant; a grim reminder of the lives lost.

Saved From Demolition
In 1893, a grand “Princess Anne” manor was built on 25th street, near Drake University, by the well-to-do Winfield Jordan. A “Princess Anne” house is like the “Queen Anne” style only without a wrap around front porch. Over the years, several families would live in the large old house. However, in the 1960’s, Drake University purchased it and turned it into student housing. Many people came and went through its doors until the time arrived that the University needed the lot to enlarge their stadium. The house was set for demolition but was rescued by the Sherman Hill Association and moved to the lot at 755 20th St (20th and Center).

Life finally returned to the bulldozed land. A new foundation was poured and it accepted the old house. Originally, the front of the house faced the East, but in its new home, it faces West. Normally, the main staircase in these period homes are along the northern wall in order to reduce drafts in winter.

In 1993, Randa and Carlton LeJeune purchased the Manor and set about restoring it to its former glory. Unbelievably, two sets of pocket doors were uncovered during the restoration! These doors separate the front and back parlors and the original dining room.

Randa has furnished the house with period antiques and wall coverings so entering the house is like a journey through time to the turn of the 19th century; it is very Victorian.

Discovered It Was Haunted

Within a few weeks of moving into the house, Randa was startled by the sound of heavy, running footsteps down the second floor hallway. Only instead of stopping at the end of the hall, the footsteps continued…..as if the person was running down the length of the Coronado hallway. Was this a spirit still searching for a way out of the burning building? Later, she would be told by relatives that one of the victims wore braces and walked heavily.

Over the course of ten years, Randa ran the Joie de View Tea Salon on the main floor of the Manor. Thousands of ladies (and gentlemen) came for high tea and sandwiches. Randa allowed visitors to wander through the house; many came to her with tales of strange and paranormal occurrences. “Is your house haunted?” they asked. Randa would always ask what they saw……A boy in 1920s clothing was seen on the first landing of the main staircase. Someone was touched by an unseen hand. A teacup was lifted off the saucer. One teen ran screaming from the house after watching a chair slide across the dining room floor. Other mysterious happenings include scissors being moved from one room to another. A book flying off the shelf and landing in the middle of the room. Heavy objects lifted off the fireplace mantle and crashed to the floor in the master bedroom. Toys suddenly appeared in the baby’s crib. The opening of all cabinet doors in the butler’s pantry while the family was away. Some of these occurrences are attributed to former occupants who lived in the house from 1893 until it became student housing.

There have been whispered voices, especially in the front foyer. You can hear a conversation going on, you just can’t make out the words. Louder words have been spoken including a male voice staying “You can see” to Randa.

EVPs (Electronic Voice Phenomena) and ghost voices have been captured with audio equipment. Shadow people, both short and tall have been seen. And, then, there’s the second floor hallway where you feel you’re not alone. There’s a presence of something there with you. It was there in April 2010, an experienced paranormal researcher, taking photos with an infrared trail cam, caught the image of a hand outside the second floor window! Another researcher was rushed at by “something” speeding through the hallway; she prepared to be struck, but nothing happened.

Of course, no haunted house would be complete without an attic which is accessed by the winding back “servants” staircase. You will find some very creepy baby dolls and, oh, did we mention bats?

Hill Top Manor is now open to private overnight investigations and guided tours. For information on reservations and pricing, call Randa at 515-491-0593.
More information is available at www.facebook.com/hilltop.manor
or www.hilltopmanordesmoines.webs.com