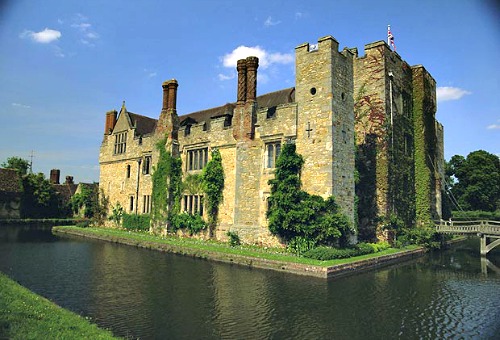 Built in the later part of the 13th century, Hever castle started of life as a simple country home. The only part of the original structure that still remains is the gatehouse and walled bailey.

The main part of the castle was built in 1462 by Geoffrey Boleyn, who was the younger brother of Thomas Boleyn, Master of Gonville hall in Cambridge, and he also added the Tudor dwelling which still survives inside the castle walls.

Geoffrey's grandson, Thomas Boleyn inherited the castle in 1505 and lived there with his wife Lady Elizabeth Howard and their three children Mary George and Anne who later became the wife of King Henry VIII, though it is not known of she was born at the castle since records of her birth have been lost in history.

Henry VIII later came to own the castle after the death of Thomas Boleyn in 1539 and then went on to pass it to Anne of Cleves just a year later. The castle went through various ownerships after this until its was restored in 1903 by American millionaire William Astor, who used it as a family residence and added the Italian gardens.

Today the castle is owned by Broadland Properties Ltd who run the site as a conference centre, though the castle and its grounds are open to the public.

There is thought to be only one spirit that haunts the grounds of Hever castle, though people claim there to be several here based on the various activity that goes on.

As you may have guessed the ghostly resident is thought to be the spirit of Anne Boleyn herself, which would make sense due to the description of the apparition and her unfortunate end creating the basis for "unfinished business".

Anne was quite happy with her marriage to Henry and longed to give him the son he wanted, but after her first child being born a girl and her second pregnancy ending in miscarriage this ambition seemed like it may not be possible. Henry grew tired of Anne in time and became closer to her maid of honour, Jane Seymour. After rumours of affairs she was arrested and charged with adultery and incest and was beheaded at the tower of London on may 19th, 1536.

Her apparition has been seen wandering the gardens of the castle, especially on the bridge in the grounds and for some unknown reason she is most often seen on Christmas eve. People have claimed that they only ever see her from a distance and if approached she fades into nothing.

The gallery is also thought to be a hot spot of the castle, with many tales of ghostly noises such as loud bangs coming from empty areas and even the sounds of muffled groaning being commonly reported.