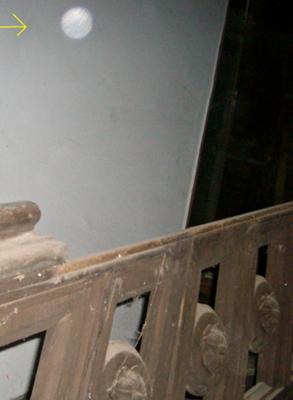 I investigate haunted locations as well. I have found quite a number of photos like the above in many of my pictures. The thing is, most if not all of those pictures above look like water vapor. I remember I first noticed the effect years ago at the beach at night. We were taking pictures near the water with a flash, and all sorts of little "orbs" popped up. Wow, the beach was seriously haunted right? Not exactly. After trying it a few times I began to see the water droplets appear in front of the flash when it went off. The same happened again one day when I was at a purportedly haunted covered bridge. Water vapor again, coming up from the wooden planks. Damn you water vapor!

The same thing happened many more times in considerably old buildings. They were old, and dusty, and little orbs showed up all over the place. Some pictures just had one or two, others had many. I was bummed.

The thing is, I actually subscribe to the theory that every once in a blue someone catches a real spirit orb. I actually do believe they exist. The problem is they are nearly impossible to diagnose.

I actually have two or three photos that show a pretty impressive looking orb. The problem is, I have no corroborating evidence. Zip. So, alas, they will go unsung.

The thing to remember is: if there are a whole crap load of floaty white dots in your picture, they are either dust, pollen, water drops or mold spores. Unfortunately.