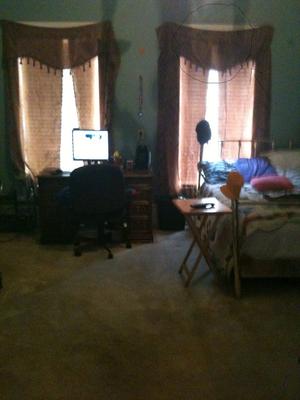 I was taking pics of my new house to post on face book, I uploaded the pics and closed the page, A week or two later I was just looking at my pics when I quickly went threw all my photos and got a glimpse of what I believed to of been a face, I thought it was my mind playing ticks. I went back to the photo and blew it up where I could clearly make out what looks to me as a face in the certain above my child's bed, The image has two eyes, even pupils a yellow color, Checks, a full head and a nose, Let me say first Iam a person who believes in Science, what I can see and Iam on the fence about Ghost. A little history, we moved into our home 8 months ago, The home is a older historic home, its around 100 years old, I know nothing of its history. There have been a few odd things happen since moving in, The first thing, the home has two levels, Up stairs and down, One day I was laying in my bed in my room when I heard someone going up and down the stairs, The stairs are old wooded stairs and are very loud when walking up and down, My home is a large home with six bed rooms, 4 down stairs and two up, We do not use the two rooms upstairs, I continued to hear what sounded like children playing on the stairs, I yelled out to my 10 year old, "Get off the stairs". No response from him, usually he'd say ok or I'am not on the stairs, The sound kept on going as if feet where stomping up and down them, This went on for 5,6 minute's. I again said get off the stairs, Nothing so I got up and came out of my room, witch is right by the stair case, No one was on them, I went into my sons room to tell him to stop playing on the stairs. I was trying to nap, when I saw he was in fact sleeping, No one else was home but me and him, Uhm I

said and just let it go. The next thing that happened was my step daughter and I went to one of the rooms upstairs where we opened the door and heard a noise in the wall it scared us and we slammed the door and left the room to wait on my husband to investigate it when he got home from work, He came in and we told him about the sounds, he went up to the room came back and said all clear nothing up there, Again we blew it off as nothing, Around Christmas time of this year I put all my Christmas stuff out and on my living room fire place I had four musical knick-knacks, a snow man, a rain dear and two Santa's, when you pick them up and shake them they play a tune. Every morning I get up before anyone in the home, I get my coffee and prepare my sons stuff for the school day, As I 'am sitting on the couch watching tv one of the musical knacks go off as if it had been activated by shaking it, but it hadn't, I got up walked over to it and picked it up, Nothing looked odd about it I shook it, It wouldn't play, I shook it harder it then played I sat it down, walked back to the couch when all four go off and start playing, mind you, you must shack them hard to play, I said weird, But I didn't think to much of it until the next morning when it did it again and then every morning at the same time until I put them away after Christmas, The next occurrence I guess Id call it was, I was alone in the house in my room, I walked out into the living room where the recliner/rocking chair was just rocking on its own. No one here I couldn't Figured it out. I never really put all of these small things together until I noticed the image in the photo. I have not done anything to the photo but circle the image I see, The photo was took with my cell phone, witch is an apple Iphone 4.

Join in and write your own page! It's easy to do. How? Simply click here to return to Comments and picture submissions.