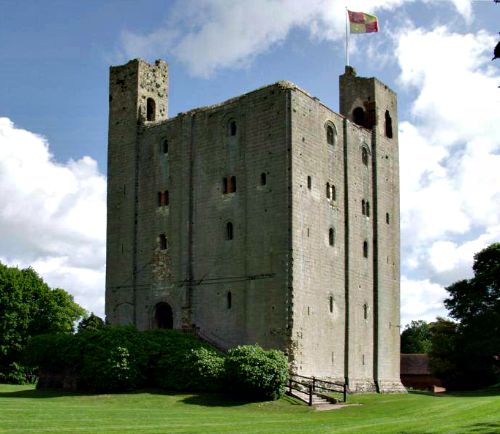 Hedingham castle was built by the de Veres family after it was awarded to them by William the Conqueror. The main castle was constructed sometime in the late 11th century and into the early 12th, though the exact date is not known.


The date for the keep however was well recorded and construction began in 1132 and finishing in 1141. It is the only original piece of the castle that is left, as the drawbridge, hall and out buildings were all rebuilt during the Tudor period.


The castle passed through various families until it eventually ended up in the hands of Thomas Lindsay, who is a direct descendent of the de Veres family through both material and paternal lines. Today his son now lives in the castle along with his wife and children.


The castle is privately owned but has been known in the past to allow investigations. There is also a company in the town that holds regular ghost walks around the grounds of the castle, telling of all the terrible things that are responsible for it being haunted?

There has been much debate about if the castle is actually haunted or not, and since it has always been in private hands it has often been difficult to get permission to conduct investigations. But there are many stories to come out of this place, however that's probably due to the regular ghost walks held here.

The woods surrounding the castle are thought to be just as haunted as the keep, with witches being the main culprit for the activity in the woods.


Apparently this was a popular place for them to practice since it was well removed from the locals. But tales of dark rituals involving murder and sacrifice have surrounded them, and this is explained as the main reason for the ghostly goings on within the trees.


As for actual activity it is mostly strange sounds and things such as shadowy figures. Though no one has claimed to have directly "seen" one of the spirits of the witches.


As for the castle tales of its hauntings are spread throughout all of its buildings, though the hotspot does certainly seem to be the keep. This is the oldest part of the castle and undoubtedly would have been the site of many deaths, both natural and otherwise.


The main ghost story about the keep is the clear apparition of a past resident, though no one seems to know who it is. It has been described as being a tall man with a beard, wearing fine clothes in the Tudor design, though this could be any number of people.


Apart from his apparition he is thought to be responsible for the heavy footsteps echoing down the keep corridors when no one is there to make them.


Whether any of this is true or not can forever be debated, and the ghost tour would certainly like to convince people the castle is haunted as that is simply what they do, but the stories keep coming out of here an don't seem to be stopping any time soon.