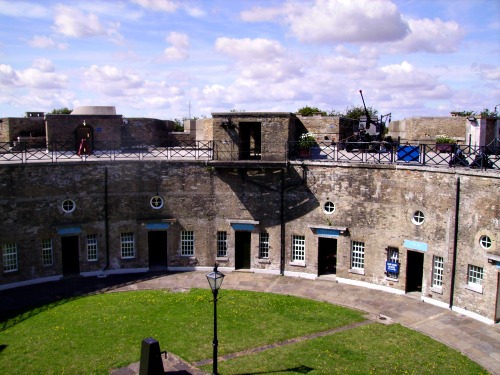 Harwich redoubt was built between 1808 and 1810 to protect the important shipping port of Harwich from the possible invasion of Napoleonic forces during the war.

It was part of a scheme to build a series of 29 Martello towers, which were small circular defensive towers spread across the country designed to offer a small but effective defense against possible invasion. They were normally quite small and the fort at Harwich is only 200 feet in diameter.

The fort was originally made to carry 10, 24-pounder cannons, though it was regularly updated to hold more powerful and modern weapons. Such as in 1872 when 3 of the weapon emplacements were updated to hold 3 enourmous 12 ton rifle muzzle loading guns.

The fort never actually fired a shot at the enemy during the war and its importance declined toward the later part of the 19th century with the construction of the Beacon hill battery to the south and was allowed to fall into decay.

The last use of the fort in a military fashion was when it housed the civil defencse organisation during the second world war. In July of 1969 the fort was listed as an ancient monument and restoration has been ongoing from then to this day.

Currently the fort is open to the public as a museum but please check with the venue directly to if you wish to visit to ensure opening times.

The main ghost which has been seen at the fort is that of a headless soldier. His story is not really unusual but that doesn't make it any less gruesome. Often the cannons in the fort were secured with heavy chains and on one of the occasions a cannon was being moved the holding chain snapped and whipped with such force it took the soldiers head clean off.

Now he is the most commonly reported paranormal sighting around the fort and has been seen in all areas of it. He his always seen wearing his military uniform and holding his severed head under his arm. People who have claimed to have seen him have always said he disappears after a few seconds of appearing or when approached.

The other most commonly seen spirits here are of the scruffy looking, shadowy faces of men peering out of the outer windows at passers by. These are thought to be the spirits of the men who were kept here when the fort was used to hold British soldiers who were awaiting trial, though there are many possible explainationa as to who these spirits are.

The most commonly reported paranormal activity after the headless soldier is of various unexplainable noises heard throughout the corridors and lower rooms, such as staff often reporting hearing the muffeled sound of a womans voice coming from the other side of doors to rooms which are known to be empty.

Also various evps have been captured here and everything from footsteps and whispers from empty areas have been reported.

It seems the forts organisers are generally open to ghost hunting groups coming to the fort since youtube is full of investigation videos taken here, but obviously its best to check with the venue itself to make sure this is OK.