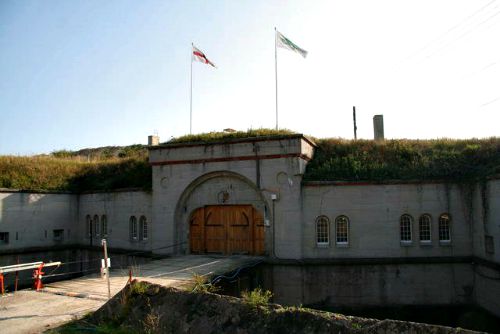 Brief History of the Fort

Fort Horsted was built as part of a plan to better fortify the country from foreign invasion. It was built in 1889 after ten years of construction which was carried out almost entirely with forced labour provided by nearby Borstal prison.


The prison was made almost entirely from concrete and was then covered in earth except for the main entrance. It was originally designed to house permanent guns, but due to the lack of threat the emplacements were set up to house mobile guns, which would be brought in when needed and also supported by nearby trenches and artillery positions.


The fort was not by any means an important site and was deemed obsolete by 1910. Though during the first world war it was fitted with anti aircraft guns and a pillbox was built on the ramparts.


The fort stood mostly empty in its life and today is let out as a business park. It is in generally good shape though some of the business's have carried out minor construction works. It is also listed as a scheduled monument and is open to the public.

Since the fort never saw any combat or even deaths its a wonder why its said to be so haunted. Who or what the spirits are that inhabit this place will forever remain unknown, but one things for sure and that is they aren't going away any time soon.


All of the ghostly experiences in this place seem to happen in the many tunnels that twist and turn under the fort. The most common claims to come from here are the sightings of shadowy figures who have been seen walking through the tunnels and peaking round corners, though they seem to be made completely of shadow and no features can be made out.


Strange sounds are also often reported in this area, with everything from heavy footsteps coming out of empty areas of tunnel to strange muffled whispers which seem to be coming from right beside you.