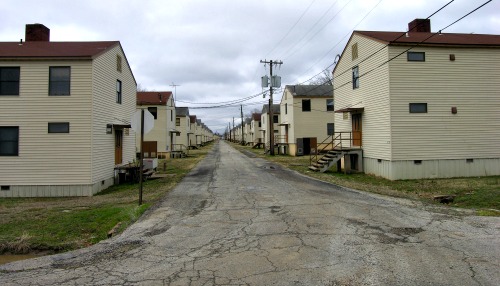 Fort Chaffee is a military training facility established in 1941 as part of the plan to double the U.S army in size in preparation for the events of world war 2.


It was named after Major General Adna R. Chaffee Jr, who was an artillery general and decorated world war one veteran. It was originally called camp Chaffee and when it was built it took up over 15,000 acres and involved the buying of land from 712 different property owners.


The camp was renamed to a fort in 1956 as a recognition of its size and importance to the U.S military. Though it is primarily a training camp it has also double up as a prisoner of war camp and also a refugee site due to its huge amount of bulk housing.


Today the camp is still a military training facility and is ever expanding, with the addition of a data centre which is expected to provide almost 1000 jobs. The fort does sometimes hold public events such as the ghost adventures tour it holds annually where you can tour the grounds and view the most haunted spots.

Normally when a fort is haunted it would be fair to assume that the reason lies behind some kind of battle, but since fort chaffee has never seen any combat it seems an unlikely spot to be haunted.


The hauntings that happen at the fort are all thought to be from a part of its life in the 1980's when thousands of Cuban refugees were held here during the cold war. The fort was capable of housing the huge numbers all in one place and it all seemed to be going reasonably well until June 1st, 1980.


The refugees were all packed tightly into the housing units and conditions were poor and tensions ran high, and on the Sunday morning a huge riot broke out, with thousands of Cubans causing havoc over the grounds of the fort.


They ended up destroying 4 of the barracks and fighting for hours with the state police and national guard, and after the riot was over the camp was turned into a prison. Miles of razor wire were put up round the fort and 2000 heavily armed federal troops were stationed there to watch the inmates.


Though the whole fort was a prison it also had its own more secure inner prison section were hundreds of the more dangerous inmates were held. After this point violence and sexual attacks became rife and many of the inmates died from such attacks.


The tour which is held around the fort today concentrates on this inner prison section, where paranormal activity seems to be experienced on a regular basis.


There are claims of everything happening in this section from the full on apparitions of some of the past inmates, to unexplainable noises and sudden temperature drops. There are also a number of the barracks which people have claimed to have been suddenly overcome with an intense sense of fear or nervousness, to the point they have had to flee the building.