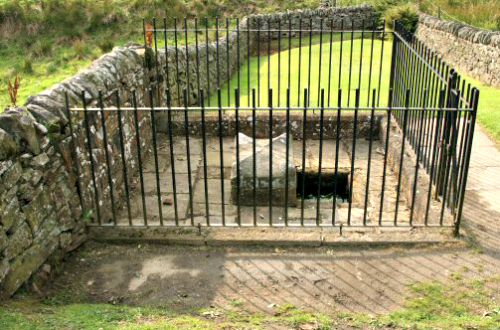 Eyam village has existed since at least Roman times, as they mined lead from the area. There are various signs of past cultures inhabiting the area even before that, with strange stone circles and evidence of buildings having been here found across the moors surrounding the village.


But the reason this tiny village is so well known is due to the plague. During the year of 1665 a bundle of cloth arrived from London for the local tailor which was infested with flees, and this was to begin the living nightmare that the villagers would endure.


The tailor himself died within a week of receiving the parcel, with other members of his family in the house dying soon after. When the villagers realised what was happening they turned to Reverend William Mompesson for an answer. He made a few decisions such as holding church services at the natural amphitheatre of Cucklett Delph, so people could sit further away from each other. He also made the rule that families were to bury their own dead, but his notable decision was to quarantine the entire village, with no one going in or out.


This decision was actually a good idea at the time, as the plague spread very easily but it also doomed the uninfected residents who wished to leave, though there was a good chance they would only end up at another infected village.


The picture at the top of the page is known as Mompesson Well. It was a place were villagers could leave orders along with money to be picked up by traders who would normally go into the village. They were left in the well which was filled with vinegar to disinfect the coins to prevent the spread from the village.


In total the most accurate number of deaths seems to be about 260 dead out of a total of 350 by the time the plague had ended, though this number has been disputed amongst historians with the highest estimates being around 400 survivor's out of a total of 800.


Today the village is open to the public as any other village in the country is, and has many plague related sites for the tourists, such as theme homes and preserved sites such as burial areas and the well pictured above.

As you can guess the source of the villages hauntings is of course the plague. With hundreds of deaths and the suffering that took place here there's no wonder there's so many ghost stories attached to this place.


The most well known haunted building in the Eyam village has got to be the miners arms. This would have been the only place the villagers would have had a little comfort during those dark times, and it seems some of the past residents just cant stop coming here. There have been various reports of strange things happening here, but the scariest of which would be reports of guests waking up in the middle of the night in their rooms to the sounds of someone scuffling around the floor boards, as if they were slowly walking all the way round the bed. Upon turning on the light there is never anything there, and this incident has caused more than one guest to leave in the dead of night (dead of night, Ha, anyone, no? Sorry).


The cottages which act as tourists attractions with plague related displays are also known to be quite haunted. With a story about the sighting of a woman wearing a blue smock coming up again and again. She hasn't been seen doing anything other than just standing in a doorway or at the end of a corridor staring at whoever is there, only to disappear if approached or left for a few seconds.


Eyam village Hall also has a few ghosts of its own, with one being known as a servant girl named Sarah Mills who worked at the time the Wright family owned it. She apparently died from falling into the well and drowned, and her apparitions has been seen within the Halls grounds, but rarely inside the building.


Eyam village has a huge amount of ghost stories and during the summer months the village holds ghost tours daily.