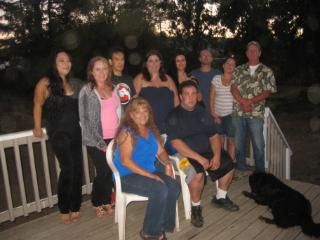 Tonight's theme song is:
http://www.youtube.com/watch?v=iDpYBT0XyvA
Warren Zevon - Werewolves of London - read on and see why.

Pictures from the Investigation:
http://s970.photobucket.com/albums/ae185/PaulDaleRoberts55/EspartoElmerArmfieldGhost/

INITIAL REPORT:
Date to be there: Sept 8, 2012, Saturday Time to be there: 1500 Hours Contact Person: Tamra Brooks Address to be at: Esparto, CA - Activity: At this home, the former male occupant committed suicide; toys go off on their own; a 3 year old baby was moved from the couch and placed into the middle of the floor, witnessed by friends; black cloud like things seen inside home.

INTERESTING FACT ABOUT ESPARTO:
In 1954, John Hester a ranch hand spotted a werewolf type of creature in the shrubbery surrounding Esparto. As John stopped in his tracks and holding his rifle, the werewolf creature stopped to look at him. The creature snarled and bellowed out a blood curdling howl. John was petrified with fear and was shaking like a leaf, dropping his rifle. The creature raised his claws over his head and snapped with his snout at John and then turned around and ran off into the deep shrubbery. John described the creature as being 7 feet tall, covered with hair, blazing reddish eyes and a having a snout of a dog. The creature is known as the Werewolf of Esparto.
Also find out why the Discovery Channel's Mythbusters are no longer welcome in Esparto here:
http://en.wikipedia.org/wiki/Esparto,_California

Also, 3 years ago, I investigated a home near the residence we are going to, here is that report:
http://www.hpiparanormal.net/HPI_Esparto.html

Tamra & Sam Brooks - Occupants are preparing chips, dip, sodas, bottled water, tri-tip, hotdogs, potato salad for us. While Sam is cooking on the BBQ, we are already obtaining designer orb photos with distinct faces inside the orbs. In one designer orb photo that Big Al took, it was the face of the occupant's close relative. The occupant confirmed it was her close relative. Shari and Big Al obtained the same EVP in two different locations simultaneously, it was a woman saying 'Sharon'. It was discovered later by Googling Elmore Armfield, that Elmore has a connection to a woman named Sharon.

FIRST INVESTIGATIVE EVIDENCE BRIEFING:
Chantal picked up that there were children on the property at one time and that some may still be here. Occupant confirms that. Robotic sounds heard on Shari's recorder (most likely recorder malfunction). Cold spots felt in barn. Jon felt like he was being followed. More orb photos taken, designer orbs too (not evidence unless you can prove intelligence or validation of a face in a designer orb - which would make the designer orb a true spiritual containment field); Jon takes a photo of a designer orb that has a werewolf face inside the orb - there is our werewolf! Chantal feels the close relative is saying we are lame and weird - occupant confirms that this close relative would talk this way. Angelita felt sadness - note: she is empathic; some investigators saw a figure move in the barn. Kit saw a white orb move in the night vision goggles. Two EVPs of possibly Elmer talking, he sounds like he is grunting with a deep voice, he sounds like Barry White on steroids. We captured an EVP of a female voice saying she is 'here'. Special Note: Chantal picked up on the 'close relative' and revealed confidential information to the occupant. The occupant confirmed Chantal was correct on all counts.

SECOND AND FINAL INVESTIGATIVE EVIDENCE SESSION:
I discovered that the werewolf designer orb that Jon captured is actually the former dog of the owners - her name was Roxanne. Sam confirms this, he says that he recognized Roxanne instantly, when he looked at the designer orb. Two more EVPs captured, one EVP that says 'wandering' and another one that says 'here'. More orb photos taken.

CONCLUSION:
This place is definitely haunted by Elmore Armfield, the daughter Staci and their dog Roxanne. The home has benevolent entities.

BELOW ARE HPI UPDATES, NEWS AND GOSSIP!

LORI SCHULZ, RADIO PERSONALITY - THE DIRT!
Sept 4, 2012, Tuesday – Place: Starbucks, 709 Cirby Way, Roseville, CA: On this day, met up with radio personality Lori Schulz of The Dirt – Marysville. We discussed getting legendary paranormal author Brad Steiger on her show, as a guest. It was nice playing catch-up and hearing about her past guests and her future for The Dirt! Thank you Lori for the vinte mocha frappachino…you truly rock! Find Lori Schulz, Radio Talk Show Host at The Dirt KMYC 1410am Marysville, CA!

BREAKING NEWS!
I have been contacted by Sam Green - former producer of Destination Truth - SyFy Channel - Mandt Bros Productions and they are interested in the Angelita Bouch'e Antelope Case. Also, I was contacted by Mike Burns of the A&E Channel in regard to our Esparto Case. Other activity at Esparto: footsteps are heard, occupants have been touched, Tamra in 1986 was in a car accident that broke her neck and part of her rehab was meditation. This meditation caused her to astral project in which she encountered another dimension. Her home was built in the 1920s and a lawyer from Woodland moved into the home for farming purposes. He committed suicide in the bedroom, his name was Elmore Armfield. He is now referred to as Elmore Armfield the Ghost.

BEALE AFB UFO HUNT PHASE 2: THE FINAL PHASE
September 7, 2012, Friday: Tonight is an interesting night. Before heading to Anna Hill’s home (which is practically next to Beale AFB), I met up with Etonia Ann Hall. Etonia is from Richmond, but now lives in the Natomas area with her sister. We met up at Jimboys Tacos – 3230 Arena Blvd, Natomas, CA. While I was chowing down on my 3 beef tacos, Etonia tells me that she dated a high ranking airman at Beale AFB. She makes claim that the high ranking airman she was dating would have pillow talk with her and once in a drunken stupor, told her that he knows of an underground complex underneath Beale AFB, that leads to a secret military base inside Mount Shasta and tunnels that will take you to Nellis AFB. From Nellis AFB, the tunnels will take you to Area 51. He makes claim to Etonia, that he went into an elevator shaft that easily fits 50 airmen. When the elevator stops, you will enter a large complex that is a monitoring center for many areas of the world. On a special assignment he was transported in the tunnel and found himself in the depths of Mount Shasta. The unidentified high ranking airman claims that Air Force Intelligence is working with moderate 5.0 Grays. When Etonia tried to question her lover after he became sober, he denied everything. This was the only information I was able to obtain from Etonia. After my meeting, I went straight to Anna Hill’s home and Anna’s son Landen and I shot a few hoops of basketball, waiting for the sun to go down. After our basketball game, we even captured a snake. Anna’s son makes claim that he once witnessed a triangular shaped craft over Beale AFB. As I spied the aircraft flying in and around Beale AFB in my binoculars, I saw no unusual UFO activity, but did sight craft that can possibly be drones flying about the night sky. This is the end of my investigation at Beale AFB. Conclusion: Inconclusive. Note: Anna Hill is the Founder of Angels of Light Paranormal Society.