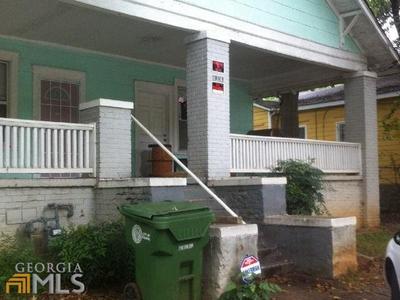 We moved into this home back in 96 or 97. We were told by the landlord that he grew up there and is just renting it because his mom owns it. There was an old piano that was there, again the landlord insisted that he played on this instrument as a kid. We did notice a stench. A smell came from the carpets and was questioned by my dad about the smell. The landlord says the previous tenants left the house a mess. It was huge. High ceilings, 5 bedroom, a large living room, dining area and a den in the back which held the only bathroom available. Every room had a fireplace. Every room you walked through also had two sided glass doors. Weird. In the front yard there was an area that the landlord claimed a swing was once there. In the back yard there was a "storage" area with all of these old things from maybe the 1920s. We didn't touch them thinking maybe it belonged to the landlord's family, since he made so much claim of growing up there.

My dad had to clean the carpet twice while we lived there. The smell would come back weeks later and it was the most horrific thing we have even encountered. We left my cat there the night before we moved in and he became ill. I had a futon bunk bed and would sit there doing homework or watching tv. My bed would raise and bounce slightly and I would always assume it was my dog. One night I thought I would chase him out of my room because the bumping and bouncing on my mattress became annoying. I looked under my bed and nothing there. Other things happened but were comical. Like a whole chocolate cake disappearing when no one was home. Cabinet doors were open when we would come home in the evening, and we could always hear people knocking and talking somewhere. We just assumed it was the neighbors. Whenever we would take pictures...the photos would be so full of "orbs" around the children that came over that we couldn't see their faces. When you walk from one room to the next and leave a glass door open, they would close right behind you. My dad stayed there one night alone while we were out of town and he called us saying someone kept knocking in the den.

One of my mom's cousins came over with her husband. My parents were young. he was an older gentleman to them. I believe he was already in his 50s. Told my parents one day that he remembered the house, that it used to be a funeral home in the 80s. One thing I didn't mention, before we moved in my oldest brother said that he remembered walking by the house a lot, and that it was a funeral home. Well there you have it. Two confirmations from two people who has never met still to this date. A FUNERAL HOME!!! No wonder, the thing in the yard that was for a so called swing was where the funeral home's sign used to be. The smell in the carpets was the smell of decomposing bodies. So did a ghost eat up that chocolate cake? Who knows? The den was the area people were embalmed. Hense the only place that held a bathroom. Fireplaces where urns were kept. Rooms where wakes were held. Then there is the piano played at viewings.

Needless to say, we moved out two weeks later. My dad did not hesitate on moving and found another house to rent right away, not too far from 1001 Metropolitan...
Only to move on Pamona Circle and find out the landlord lied about his father dying in a home. After hearing noises in our basement we were told by the old lady across the street that her dear old friend was found laying on the stairs leading to basement, dead.