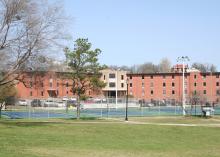 The ghost of a former student-athlete has been seen in the lobbies of Pontotoc Hall. In the fall of 2004, a student at the college was run down on the highway when the father of a girl he had dated found out about the relationship. The first sighting was reported shortly after a memorial service was held on campus. Upon returning to the dorm, one of the young man's teammates walked into an upstairs lobby and saw him sitting on a sofa. Supposedly, the apparition asked the question, "Why is the dorm so dead tonight?" before suddenly disappearing.

Other students report seeing him in the downstairs lobby and walking down the 3rd floor hallway. Students on the 3rd floor claimed that their Resident Advisors told them to ignore the young black man who would be seen sitting in the chair in front of the windows. They were also told not to move the chair. Once, after someone had moved the chair, residents of the hall reported hearing someone running down the hallways banging on the doors. Lights would turn off and the sound of squealing tires were reported. When the chair was put back into place, things would return to normal. The dorm has since been redecorated, but the chair has remained in its place.