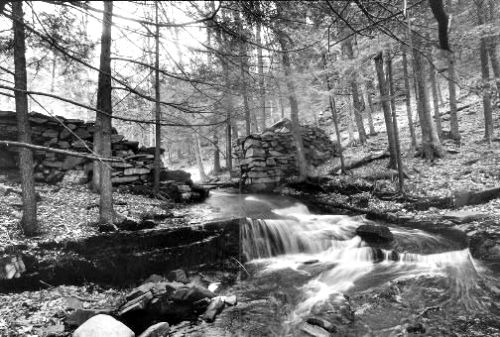 The first people settled in Dudley town during the 1740's, however it was never officially a town, this was merely a nickname given to the area after members of the Dudley family settled here from England.


The area was covered in forest and a small section was cleared for farming, which meant people would have to live near by, and after a few members of the Dudley family moved in to the area, other family's followed shortly after.


The town itself was positioned near the top of a hill and did not have the best and most easily workable farming land, though many family's lived here and worked the fields for generations.


The town started to decline around the mid 1800's and quickly had its whole population leave the area. The reason for this is because a lot of open, more easily worked land opened up in the mid-west region, and that combined with the decline in the local iron trade led to an unnecessarily hard life here.


Almost all of the farms and buildings were sold off to New Yorkers who were looking for a quiet life in the country, and today all that remains are a few small walls and foundation outlines. Please note that almost all of the area is now private and it is considered trespassing to enter without permission.

There is a well known story attached to Dudley town which led to its other name of the village of the damned. The story tells of how the first Dudley to move to the area was a descendant of a man beheaded for treason during the reign of King Henry VII, and from that moment on the family is thought to have been cursed.


Residents of the town are said to have gone insane and suicides were very high for such a small population, with many of the people telling of visions of demons just before they took their own life.


Accidents and murders are all said to have taken place here, with people who have visited the area claiming of things such as evil vortex's and harmful psychic energy in the area.


In truth though some of the people who committed suicide in these stories either never set foot in the town or did in fact take their own lives but somewhere else, and accidents here weren't higher than any other such settlement.


So why is it considered one of the most haunted places in the country?, Well the answer would come from the many claims people have made after visiting here. Tales of apparitions and strange glowing lights floating through the trees.


EVP and orbs are also common, with strange whispers floating on the breeze and people being overcome with intense emotions of fear or sadness are amongst the many claims from this place. Perhaps the organization that owns the land has closed it off for a good reason, since they very rarely allow anyone to enter the area.