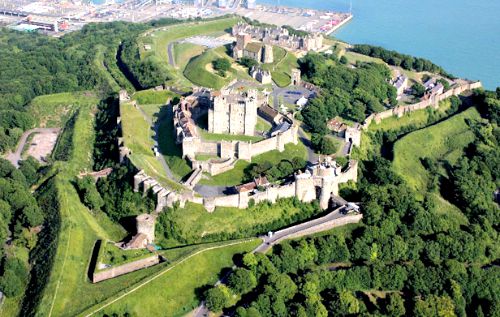 Dover castle is the largest castle in England and has often been referred to as "the key to England" due to its strategic importance.


The castle was built during the 12th century during the reign of Henry II, but there has been some kind of fortification here since before the Romans invaded.


The castle underwent massive rebuilding during the end of the 18th century during the Napoleonic wars, were a number of gun emplacements were added along with the defensive earthen bank to stop enemy fire. Also during this time Engineers built a series of tunnels about 15m below the top of the cliff to house troops, and at its peak these tunnels were home to 2000 men.


During the second world war these tunnels were converted into air raid shelters and a command centre, which was often visited by the then Prime Minister Winston Churchill.


There are over 3 miles of tunnel built into the cliff, with some being blocked off due to cave ins and some considered to dangerous for people to go into, which has led to many claims that some of the tunnels haven't been explored since they were built. For some reason full information about these tunnels is not due to be released until 2020-2025.


Today the castle is open as a tourist attraction and cared for by English heritage. It is open to the public all year round as are a number of the tunnels which can be seen on a guided tour.

The battlements are believed to be a hot spot for ghostly activity, with one of the most commonly reported spirits being that of an old drummer boy. The story goes that he was involved in earning a little extra money on the side from a job given to him by some soldiers. However somewhere along the line something went wrong and to avoid being exposed the soldiers killed the boy by cutting off his head on the battlements.


It is this drummer boy that people have claimed to have seen in all areas of the grounds, but mostly along the battlements were he has been described as walking around with no head, and the sound of his drum has also be heard.


The keep is also home to its own spirit, but who she is remains unknown. An apparition of a woman wearing a long red dress has been seen in the area, along with the apparitions of several cavalier soldiers.


But the most haunted area of Dover castle is without a doubt the tunnel system built into the cliffs. All kinds of tales have come out of this place with stories ranging from general sightings, to poltergeist activity. One interesting claim to come out the tunnels on a number of occasions is that of people being chased.


Sometimes when a visitor takes a wrong turn or gets separated from the rest of the group in this area, there have been claims of how they were chased back by and unseen spirit. Loud footsteps have been heard walking directly towards the lost visitor, which often makes them turn in the other direct, only to have the footsteps pick up pace as if starting to run towards them, though no one has even claimed to have been touched by this spirit.