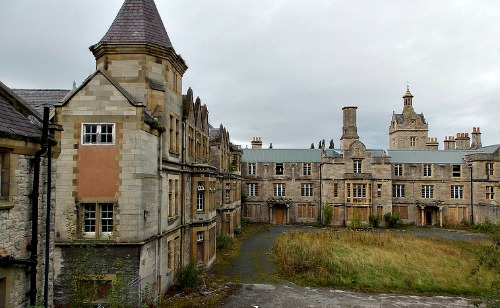 The Denbigh mental asylum is officially known as the North Wales Hospital, but took the variation as many homes for the insane were simply refereed to as asylums. The building was designed by an architect named Thomas Full James who started construction in 1844, with the completion and doors opening in 1848.

The asylum was originally built to house between 60 and 200 patients, with plans for additions should it need to be expanded, which happened gradually as the need for treatment of mental illness increased. The asylums limits and resources were often stretched with capacity often exceeded well above what could be suitable treated.

The building acted as a normal hospital after its use as an asylum but was closed in sections from 1991 to the final closure of the whole building in 2002. The hospital is of substantial size and even had its own gas works and farm. Today the building is a privately owned Grade 2 listed building and has been badly damaged by fire, so tours are out the question and there is strictly no trespassing.

Now most asylums have ghost stories attached to them, and perhaps for good reason as many believe the creation of ghosts is due to the severe emotions experienced by a person to connect them with a location. Asylums were known for being the worst place you could be sent and rarely ended well for the patients, with many people being "treated" until they died.

This asylum is a little different from the others of the day, and not in its treatment as Denbigh mental asylum implemented the same horrific practices which other such buildings of the day did. But it was different in the sense of its regular mix of 2 races, and the extra suffering and confusion it caused.

Denbigh mental asylum was governed by English workers but saw a mix of English and Welsh patients. Below is a letter from the superintendent of Gloucester asylum, Dr Samuel Hitch who had experience on the matter:

“So few of the lower class of the Welsh, except in some towns or the precincts of inns, speak English, and this only for the purpose of commerce, or to qualify themselves for duties of menial servants, and not to an extent which would enable them to comprehend anything higher, – whilst both the officers and servants of our English Asylums, and the English public too, and equally ignorant of the Welsh Language, – that when the poor Welshman is sent to an English Asylum he is submitted to the most refined modern cruelties, being doomed to an imprisonment amongst strange people, and an association with his fellow men, whom he is prohibited from holding communications, harassed by wants which he cannot make known and appealed to by sounds which he cannot comprehend, he become irritable and irritated; and it is proverbial in our English Asylum that the Welshmen is the most turbulent patient wherever he happens to become an inmate”

This created extra strain on the asylum and mixed with the overcrowding saw a drop in patient care and there are even stories about the more violent patients murdering others.

As for the ghostly experiences to be had here there are tales of everything from full apparitions of patients walking down the corridors, to more subtle signs. One of the most commonly reported was strange noises, such as footsteps and banging sounds coming from empty areas.

It is said that the ghosts hear answer to people in the form of tapping, making themselves known upon request. But again please note the building is heavily damaged and privately owned so ghost tours will not be taking place any time soon.