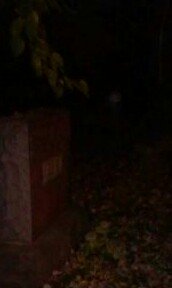 orb to the right of headstone 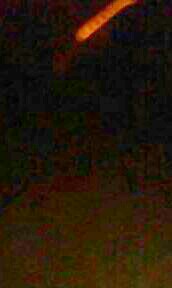 demon and red streak of light

Well, this graveyard has a legend of a lady in white, named Alice who has been seen floating across the street( Henry Ruff) at night.My husband told me a story of how he saw her one night while he was driving a taxi. And also, a Westland police officer saw her crossing the street one night as well.Hearing these stories made me and some of my family members curious.So,I decided to download an EMF detector on my phone and head up there a few days before Halloween to do some ghost hunting. (Why did I do that? smh) At first,it was 4 of us who entered the cemetery.We picked up a lot of energy on my EMF dectector and snapped pictures in the area where the energy peaked.The whole time we were there, I felt like we were surrounded by several spiritual entities.And let me tell you, the overall feeling was negative. I really didn't want to be there,and wanted to leave as soon as possible.So we left out but decided to go back in a second time.Because a group of friends arrived upon our exiting and wanted to join in on the fun.All 8 of us had begun to enter the cemetery, and at the front gate I heard the most terrifying loud demonic growling.I ran..lol..and I won't be going back either.(Only 3 out of 8 heard it)Also,I caught a image on my camera that looks like a demonic presence.It's the pic with an orange streak on it.Right next to it is a demonic face..two of them.I also caught a few images of orbs and a mist.I don't know if Alice is still there or not,but I know something that is not so nice is hanging around that cemetery.Be careful when you go there messing around with the dead.It took me a week to finally feel like i wasn't being followed around my house by something that I had brought back with me.