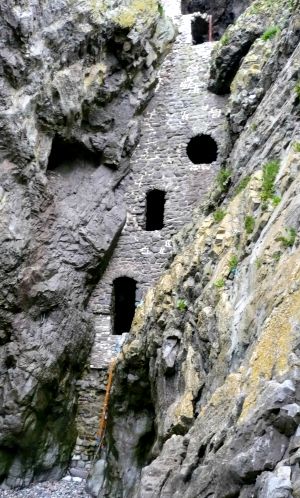 Culver Hole is a rather unusual structure believed to date back to the early 13th century. The word Culver is an old English word for Culfre, which meant pigeon, and this structure was a way to encourage pigeon breeding, since the winter diets of medieval peasants would have been quite meagre and pigeons provided a source of red meat all year round.


The inside of the tower has around 30 tiers of nesting boxes and a spiral stairs case that winds up through them all, so a single person could easily collect all the eggs in a single climb.


Pigeon houses were quite common in medieval times, since they bred all year round and were quite easy to keep, but the position of this one made an attractive base for people who were not interested in pigeons. Since its located close to the Swansea shipping routes it became an attractive stronghold for smugglers.


Wales had quite a big problem with pirates and smugglers in the past and the position of the cove and how difficult it was to approach meant a few men could easily defend it against many, and with it not being used as a pigeon house at the time it meant no one was checking up on what was going on here.


Many stolen goods were stored here and it was used as a hideout and trade post for any pirates looking to shift their ill gotten gains.


Today Culver hole is generally accessible to the public since it sits in a coastal cliff, though it can be quite dangerous to access since it gets cut off by the tide. It is also a Site of Special Scientific Interest and a Scheduled Ancient Monument.

The structure itself is one of those places that could make someone believe its haunted just by the way it looks, but it is not its appearance that makes people fearful of the place.


Since pirates were not known for keeping the most up to date records of their activities, there's no official documentation of any deaths here. However there is a good chance that over the hundreds of years this things has stood here that some of the pirates injured in their antics would have been brought back here to die.


This would certainly explain why some people have claimed to have seen the apparitions of a rough looking man inside the tower. One story sent to me explained how a curious tourist was climbing the steps of the tower only to come face to face with an angry looking bearded man, who apparently made an angry face at the shocked holiday maker before fading away into nothing.


There is also a story about when the tide is in, feint screams can be heard coming from the base of the tower, as if a person were drowning . Whether any of this is true or not can forever be debated, but there's no reason that if somewhere as old as this place can be haunted then it has a good a chance as any to be true.