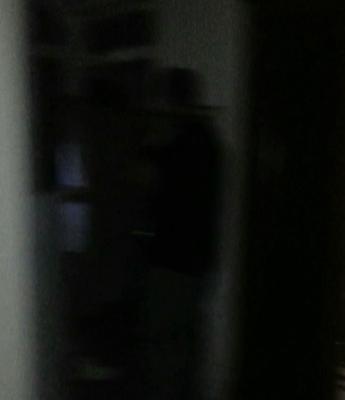 Caught this on camera and screen shotted from my phone

I went to a paranormal investigation that started at 8pm and ended at 4am at the jail on Sept 14th 2013. We witnessed many things such as doors opening numerous times, foot steps, temperature drops, battery drains, heavy air, mists, Orbs. I got pictures and videos of orbs moving and also used a greet light to shine on the wall and see the shadow of a person standing in the doorway. I got a picture also of an aparision (black shadow) of a person standing in the corner by a book shelf. We had an audio recorder on for about 6 hours of the 8 hours we were there. We caught numerous things on the tape. You can hear the spirit whispering on it. My dad said are you whispering.. it stops, he said can you whisper for me again and it pics up.. We at one point ask the spirit what its name is and you can hear on the audio tape "smith" some lady had an ap on her phone and the word Smith shortly after came accross her app and she said i have the name smith. (this was about 1 second after it said it) Another time you hear the door completely latch. Then you hear something say this door should be left open. The door unlatches and opens up, then can hear me say, the door just opened again. Also my dad was sitting at the top of the stairs (4th floor) and the door opens alone.. he turns and says okay? You can hear right before he says okay.. theres someone in the f***ing doorway. Another weird thing is another group that was not with us were being very disrespectful and talking and provoking the spirit. She said proove to us your real, do somthing, we dont believe you exist. A few seconds later on the cam, you hear something say "she needs to go" and her husband jumps up as he gets scratched. He was bleeding. Shortly after they left, he said he wouldn't set foot in that jail again. We saw many other things but here was a list of a few things that happend. Most of the activity happend on the 4th floor which was the wardens quarters of the jail, and not the actual jail itself. The jail is opened to the public for tours however they never let you go on the 4th floor (i dont think they want to piss it off) Anyways, definetly a place to stay at and see for yourself. Got some amazing stuff