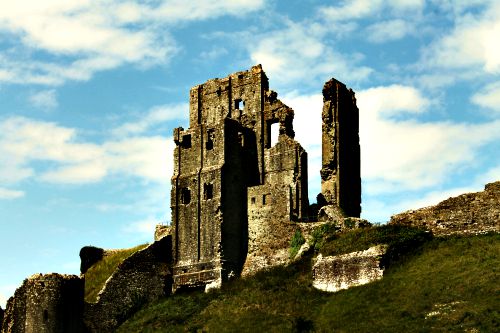 Corfe castle is a ruined medieval fortification built by William the conqueror sometime between 1066 and 1080. Towering over the village of Corfe snugly atop the tallest hill on the isle of Purbeck, it was one of the very first castles in England to be built using stone instead of the earthen bank and timber design.


The castle grew steadily, especially during the 12th and 13th centuries and stood as one of Englands castles never to be conquered. This however would all change when Elizabeth I sold the castle to Sir Christopher Hatton. He later sold it to Sir John Bankes who was the current owner at the time of the English civil war.


Although the castle had left the ownership of the crown when Elizabeth I sold it, the current occupants were still loyal and declared themselves royalists.


During the civil war the castle was one of the few remaining strongholds to be under the possession of royalist troops and was attacked. The first attack was unsuccessful, with the royalist defenders beating back Parliamentary forces after being rallied by Sir John Bankes wife, Mary.


The second attack however was far to strong and the castle fell to Cromwell and his army. One of the things that Cromwell was well known for was destroying strongholds to the point where they would be useless as a defence, and at Corfe castle he did just that.


The castle was far beyond repair and because of this no one bothered to even try to rebuild it. It stood in ruin until it was taken into the ownership of the national trust and is now a grade 1 listed building and a scheduled monument.


Today the castle is open to the public as a tourist attraction and receives around 200,000 visitors a year.

Now you may guess that the ghosts that haunt the castle are probably the spirits of the past soldiers or owners who lived here, but for some reason that doesn't seem to be the case. The most well known ghost at the castle seems to be that of a common peasant girl.


Apparently she was accused of stealing something from a lady of the castle and was hung at the gallows. Whether or not this is true will forever remain unknown, but if its the case it may explain why people have claimed to have seen her apparition around the ruined walls. Often being described as wearing ragged cloths with tatty brown hair, there was even one report of someone who said they saw her actually hanging in mid air.


As for other activity here it all seems to be unexplainable sounds. No other apparitions or strange goings on have been reported, but the sounds seem to surpass most other haunted places in terms of frequency.


All kinds of things have been captured on EVP recorders, as well as many stories of people hearing things such as people talking in muffled whispers on the other sides of walls and in the tower rooms.