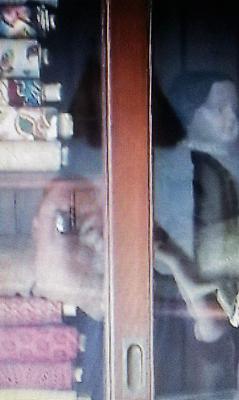 On August 13,2016. The day before we went to the Hotel Del Coronado, we visited the Whaley House Museum. My fiancee, and I were touring this fascinating old house, took lots of photographs. This one particular photo you can see my fiancee reflection in the glass case taking the photo, and there is a ghostly lady standing above him in the reflection, with the outline of her face wearing a old fashioned dress. Now there is nothing behind my fiancee to reflect this image. We have another picture of the same room, and there is nothing but a red wheel barrow behind him.We believe this is Mrs. Whaley, because we bought a book and her photo in the book looks exactly like her. This house is believed to be one of the most haunted places in America. I would like opinions on this photo, because its so fascinating and spooky. We have never took photos like this before.
Thank you!