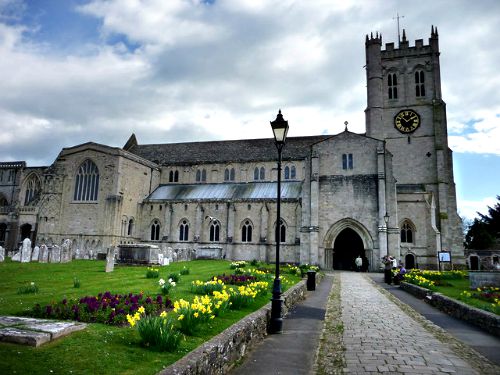 Christchurch Priory goes right back to the mid 11th century, with it being officially recorded in the Doomsday book as having 24 secular cannons in the area, which is like a small collection of priests, often living in the same building.


The first permanent stone church here was built in 1094 by one of William II chief ministers, and has an interesting legend attached to it. It states that the church was originally intended to be built upon the top of St. Catherines hill but during the last night before construction began all of the building materials were mysteriously transported to the location it stands in today.


There is even a story about how Jesus Christ himself visited the church, and this tale led to the town having its current name. The story goes that in the 12th century during the current churches construction, a group of workers had cut one of the beams to short, which was an expensive and embarrassing mistake. However during the churches construction there was a worker who would always keep to himself and ate alone, and the next day when the workers came to face their boss about the mistake they found that the beam was the right length and had already been put into place, and the mysterious worker was never seen again. The beam can still be seen today and is located in the Ambulatory.


The church is home to some interesting historical pieces, such as various writing dating back to the 12th century, as well as some impressive architecture that dates anywhere between to 12th and 15th century's. Today the church is still standing strong and open to the public in the way that any other church is.

Christchurch priory is considered by many to be one of the most haunted places in the country, and certainly one of, if not "the" most haunted church.


The reason its considered so haunted isn't due to the high number of spirits here, but more because of how active they are. Many people who have visited the church have seen apparitions of monks, both inside and in all areas of the grounds. They are always very similar in appearance, wearing the traditional monks robes with bold heads. They never seem to speak or become aggressive in any way, often just seen walking along for a few steps before fading away into nothing, as if going about a part of their normal day without paying any attention to the visitors.


There is also a lot of voice phenomenon here, with people capturing everything from general whispers to some more scary quotes mentioning the devil and warnings to leave the area. Below is a youtube video of a couple of paranormal investigators who took some time to make an excellent video. There is some scary sounds captured during the second half when they are in the graveyard, including being told that "the devil is coming".