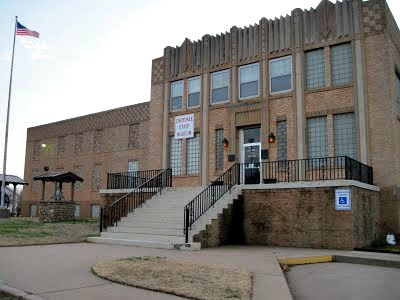 The building which today houses the Cherokee strip museum started off life as a hospital. It opened its doors in 1932 and acted as any other local hospital servicing the community.


The building was bought by the Cherokee strip historical society and opened as a museum in 1975, and holds an impressive collection of Indian arts and artefacts. Many of the rooms have been theme designed and the building has its own old fashioned Presidential room, drug store, kitchen, school room, army room and prisoner of war camp.


It is open to the public and is more than worth a look around if you are ever in the area, even if you don't see anything spooky.

Is the Cherokee Strip Museum Haunted?

Since the building used to be a hospital, and with medical knowledge being what it was in the day, there were certainly many deaths at this building.


The hospital itself didn't have a particular bad record, but many of the spirits who reside here today are thought to be from the failed operations carried out on patients. But to be fair without things such as antibiotics there was a pretty good chance anyone having a serious operated would have died.


The hauntings were thought to have began shortly after it was renovated and opened as a museum. Stories of unexplainable and sudden cold spots as well as the sounds of ghostly whispering coming from areas known to be empty are amongst the most commonly reported activites here.


Today the top two floors of the building have been bricked up and now it seems the spirits here have all shifted to the lower floor.


The most well known paranormal activity here has to be the piano in the reception area. Many staff and visitors to the museum have heard the piano start to play on its own, but only when there is no one in the room. People who have heard the music have gone to check on who is making the noise, only to always find the area empty.


Apart from the above there are the usual claims of things like orbs and strange lights which have been seen around the Indian artefacts display, but who or what these lights are will never be known.