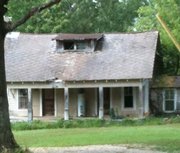 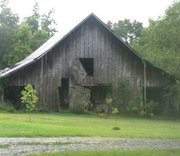 
I heard a couple was looking for a home along time ago that had a property listing about 160 acres, the next time they came to look someone had already purchased a portion of the property on the far side.


The land owner told them that there was these two people wanting to get married but the woman's parents wouldn't let her, so they had planned to sneak off and go get married secretly.


Somehow her parents found out and they would let her see him again, then one Sunday morning, she faked sick and the parents went to church without her, when they left, she hung her self in the barn, it is told that the rope she hung herself from is still hanging from the barn inside.


Now on the part of the property that the couple purchased, there was an old house that thought to be built in 1821, it has a basement that is filled to the top with water, and two floors, and a barn that was built about the same time, before they build a new home they moved into the old house.


Now, a couple of people that sill own the property seen the upstairs window having a blaring red light, when they went to go check it was gone.


There is noway it could of been a light bulb since it was so bright and nobody lives out there since there so far out.


Also, there hasn't been electricity in years! The photos are the pictures were they saw the light and the barn by the house. ( not the one were the girl hung herself. )