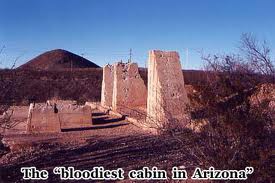 According to the book Arizona Gunfighters, Frederick Brunkow was a graduate of the School of Mines which was located in Freiberg Germany. Frederick fled Germany and decided to try his luck at mining in Arizona. Eventually he started his own mining company called the St. Louis Mining Company. After careful consideration, he chose a spot on the San Pedro River with which to begin his operations. Frederick hired a group of Mexican Nationals to work his mines.


On July 23, 1860, the Mexican employees slaughtered nearly everyone at the mine. The only person spared was the cook. William M. Williams discovered the aftermath upon his return from Fort Buchanan. Those murdered were William's own brother, James Williams, J.C. Moss, and Frederick Brunkow who was found at the bottom of a well. A rock drill was stabbed into Frederick's body.

Ghost Trapper invited me to be a guest investigator at Brunkow's Cabin on three separate occasions. Of course I said yes! Although the history of Frederick Brunkow and his mining operation are interesting, his cabin has produced very little evidence of spiritual activity. However, the ruins at the parking lot are a totally different story.

The first piece of evidence was a black mist caught on a Sony Hi8 with NightShot infrared. The mist could not be debunked. The second investigation yielded a very clear EVP (electronic voice phenomena) that was a direct response; spirits were asked repeatedly to "make the green light turn red" on the K2 (electromagnetic field detector). The theory is: a spirit will set off an EMF detector when present. The K2 never lit up, but when it was turned off at the end of the investigation, an EVP was captured saying "took the green", and a second voice whispered "magic". All night long, the K2 had been referred to as being a green light that was sort of like a magic trick!