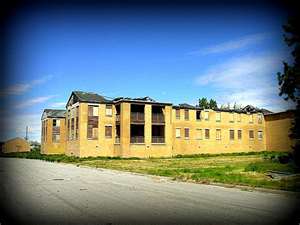 There are old Indian Schools in the middle of Brigham. If you go up on the mountains a little bit you can look down a see a bunch of them. They are pretty big. The schools were turned into hospitals during WWI or WWII. Devil worshiping has been reported there. My friends once claimed to find the remains of a cat that had been cut to large pieces. I once went in with 2 friends at 10pm, armed with our phones as lights and a lead pipe I found outside. A lot of scary graffiti and references to satan and murder. A couple funny sayings as well as some amazing pictures. We only went in one building but there are about 12. You have to climb through broken windows to get in. There is a basement but we only tried one door and it was locked. Strange sounds and very very dark. Overall experience was frightening but I would do it again with actual flashlights and maybe a big sword and I would like to try out some of the buildings known for Satanic Rituals.