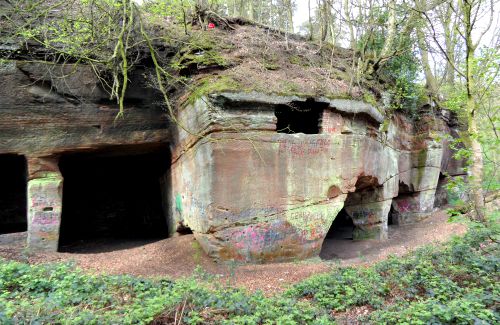 Breif History of the Caves

Beech Caves is a system of man made caves which spans an area of about 2400 sq meters. When the caves were first built is unknown, but a likely start time would be in 1633, when a man named by Roger Low was paid 22 pence per score to remove 130 feet of stone from the site on 31st August, 1633.


There is also a record which states that the nearby Trentham hall was built using the same red Keuper Sandstone found in Beech caves the same year Roger Low was paid to extract it, suggesting it was built with stone taken from here, though there are no official records stating this. There are also further records of more stone being taken from the cave during the 1680's.


An 1850's Tithe map shows the area where the caves are as being under the ownership of a man named Thomas Fitzherbert, though the caves themselves did not appear to be shown on any map until 1924, when it was shown for the first time as "Beech Caves", though who named it is unknown.


Apparently the caves were strictly out of bounds during the second world war, with locals telling of how it was permanently guarded by troops and believed to be an ammo storage site for the ordinance factory at nearby Swynnerton, though there are no official records to show this.


Today the caves have not been sealed off and have been left open to anyone who wants to see them, which has led to a lot of graffiti and rubbish being left in them. There has been plans by the local council to seal the caves off in the near future due to health and safety reasons.

Are the Beech Caves Haunted?

The caves have a slightly different type of haunting, and it didn't come from an old miner who died in an accident or those wounded in some explosion from its days as an ammo dump, but rather from the illegal raves held here during the 1980's.


Since the caves are slightly out of the way they make the perfect place for people to do things they shouldn't be doing, and at illegal raves pretty much anything goes. As for the actual ghosts they are all thought to be from the people who died from overdoses at these raves, and now like to make themselves known when people enter the place they died.


The most common reports of spooky activity here come in the form of unexplainable sounds, with a common one being that of the sounds of someone gargling and gasping for air, as if choking on some kind of liquid, though when the area the noise is coming from is investigated there is never anything there.


People have also claimed to have seen apparitions in the caves, though they are always described as being in a full shadowy form, with no features being able to be made out.