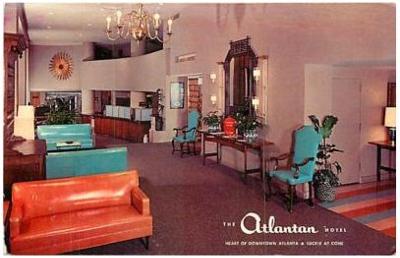 I was working for the federal government at Fort McPherson, GA back in 1987. I was assigned to a special team that required a lot of travel so I terminated my lease. I would work in Washington DC for a month and return to Atlanta for a week and then return to Washington DC.

I lodged at a number of Hotels in downtown Atlanta when I would return from Washingon DC. One of those Hotels was the Atlantan Hotel.

The Atlantan Hotel was an old hotel back in 1987. When I entered the room it was like I was transported back in time to the 40s and 50s.

I immediately noticed something strange about the bathroom. At the time I did not realize that a spirit was present. The bathroom was very clean and still had the original decorative tile.

I opened a few drawers and put away my suit case. I could hear other residents in the room next to me ask if there was anyone staying in my room.

I laid down on the bed all the while feeling uneasy as though I was not alone.

Somehow I fell asleep in the bed with the TV on. Do you remember how the old TVs without a signal would show what we called snow? Well, something woke me up!

As I was gaining consciousness all that I could see and feel was this snow. When I opened my eyes there was an attractive white women with black hair with one of her hands on my chest and another holder her chin and smiling at me.

She meant me no harm. But I threw her and myself out of the bed. I landed on the floor next to the bed. When I realized she was a spirit I asked her to come back but I could not sense her presense.

I went back to sleep and woke up the next morning. On my way to work I stopped at the front desk and asked the attendant if anyone was ever killed in that room. She hesitated and said yes!

Well, I did not lodge at the Atlantan Hotel again.

Years later I prayed that her soul would be released from the Atlantan Hotel.