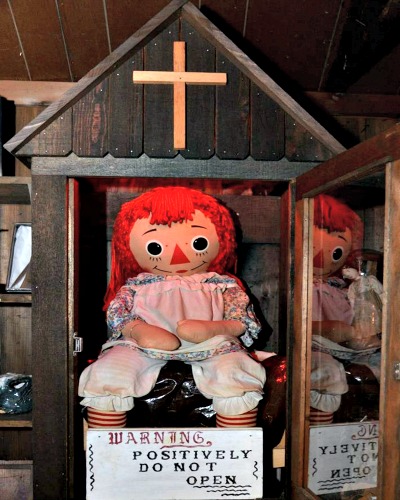 Is Annabell the Doll really possessed?

Annabell is probably one of the most famous haunted objects in the world, though haunted objects arnt particularly famous by normal standards. The story of Annabell goes back to 1970, when a normal girl named Donna was given the doll by her mother.

A few years later Donna moved out of home and lived with one of her friends, Angie. Everything seemed pretty normal until The two noticed that the doll would sometimes change positions. To start with it was very small, such as the doll just changing direction slightly overnight or a very slight change in the position of one of its arms.

This gotalot worse very quickly as the two friends would start to find the doll had moved around the apartment. Being left on the bookshelf one night only to be found on the sofa in the morning. This obviously started to scare the girls considerably, who to begin with thought it was each other playing pranks.

Soon after the doll started to move on its own they started to find notes around the apartment whenever they went out or slept. The notes would say simple things, with the most common one being "help me". The odd thing about these was that the notes were always written on parchment paper, even though they two didnt keep any in the apartment.

This scared the girls so much they eventully called in a medium who concluded that the doll was possesed by the spirit of a young girl who was buried under the house. Thought the medium was unable to communicate with the doll or determin a reason it was asking for help.

The movement and the notes didnt stop, and one day Donna found the doll with a red substance coming out of its hands.

This would not be the worst thing that the doll would do to scare the two friends, as their friend lou could testify. One day he was invited to stay over at the apartment as he was going on a roadtrip with Donna and Angie the next day. His story is one of those that most would dismiss as just a camp fire story, but enough people believed it for the doll to end up in an occult museum in a specially made wooden case which has been coated with holy water.

The story goes that the night that Lou stayed over he went to sleep as normal, but sometime during the night he woke but was unable to move, a symptom of sleep paralysis, though the scary thing about this was that he could feel annabell climbing up his leg and onto his chest. Next he claims that the doll started to strangle him until he passed out. He woke in the morning as normal and told Donna and Angie about it but they dismissed it as a nightmare.

Later that day when they were preparing to leave on the trip, they heard rustling noises coming from Donna room, even though all three of them were in the living room. Convinced that it was someone who had broken in Lou went into the room but there was nothing out of the ordinary, apart from Annabell the doll who was sitting on the floor in the corner. Lou then claims that he felt someone standing behind him, turning round to find nothing he the felt an intense pain on his chest and looked down to see blood coming through his shirt.

On his chest there were 7 claw marks, 3 vertical and 4 horizontal, and from the discription of the three witnesses they appeared to have been made by something intensly hot, as the wounds were almost completely sealed.

The scrathes healed within 2 days but the experience was enough to warrent the doll being taken to several priests and mediums, though non were able to actually do anything about the spirit within the doll. It eventually arrived at the Warren Occult Museum in Monroe, Connecticut, where it remains to this day in a wooden case which is apparently covered in holy water to stop the doll from escaping.