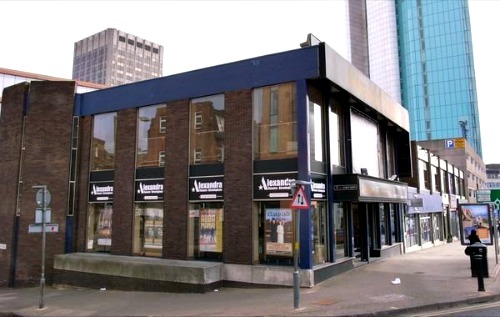 Construction on the Alexandra theatre began in 1900, with the doors opening to the public on the 27th of May 1931. Initially the theatre was expected to do quite well and to boost start up interest the theatre hired actor and play writer H.A. Saintsbury, who was even a mentor to Charlie Chaplin, for 10 weeks in the summer of its first year.

After a small trickle of initial customers the theatre did very poorly in its returns and the owner was forced to sell it to Lester Collingwood for the sum of £4,000, who soon renamed it the Alexandra on the 22nd of December 1902.

Collingwood only held onto the property until 1910 when he died in a traffic accident and was succeeded by Leon Salberg. Mr Salberg performed a heavy renovation in 1935 and fitted the inside with fine art decor. Unfortunately for him though he only saw 3 years of business with this fine new look before dying in the theatre office. Running of the business went to his son and the family held onto the theatre until 1977 when it went into the hands of another private owner.

Today the theatre is run by the Ambassador Theatre Group and after a bit of a touch up, was renamed the New Alexandra Theatre.

Is the Alexandra Theatre Haunted?

The theatre is thought to have a few ghosts roaming around its rooms, with the most well known of which being the theatre's previous owner who was found dead in his office, Leon Salberg. People have claimed to have seen his spirit in or close to the room he died in, as well as other ghostly signs of his presence, such as objects being moved and the scuffing of feet and the sounds of a chair being dragged across the room when it is known to be empty.

The buildings previous owner isn't the only former worker who still lingers here. One of the stage managers known as "Dick" has been heard jangling his keys as he does his walk around of the building in the evening to make sure everything is in order. Also not to forget the former master of wardrobe who is also said to have died in the building, though this spirit has only been witnessed within the back dress room area.

When the building first came to be known as being haunted is unclear, but the first report of ghostly activity here goes back to 1987, when a cleaner reported seeing the apparition of an old woman dressed all in grey walking into a room and vanishing.

Living guests are not the only beings to inhabit the theater's seats, as a man dressed in smart military uniform and wearing a top hat has been seen sitting in random chairs in the main room after closing.

The other main odd phenomenon is how the spirits seem to affect electrical equipment, with the power from such devices as cameras and phones being rapidly drained when within the theaters walls, only to recover power upon leaving.

The building is widely known to be haunted but a spokeswoman for the Alexandra theatre recently told the Birmingham Mail: “I haven’t experienced anything ghost-related and we have a team of fairly new staff so we don’t have anyone who has had a personal experience.”

Though the ghosts of the theatre may not come out all that often they are certainly still here, with a ghost hunting team called the UK Paranormal Consultants doing an investigation and finding many spooky signs. Such as doors opening and closing on their own and strange tapping noises which seemed to follow them around the whole building. They also had a problem with their equipment going flat and turning itself off and on again.