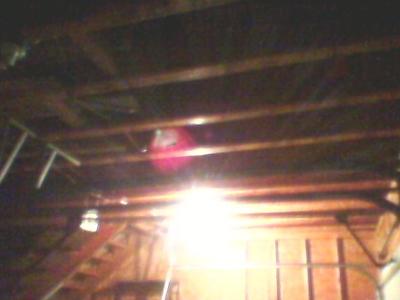 We bought this house in December of 1999. When we first moved in, I had an infant son (Colten) and a 5 year old daughter (Chezna). At first I would just hear strange noises at night thinking it was just the house settling, plus PARTS of this house are over 130 years old. But my daughter WOULD NOT go upstairs by herself. She always told me someone was watching her, I'd brush it off as her being a child and unfamiliar with the house. But when my son started talking, he would be in the living room by himself and I'd hear him talking to someone, I'd go see who he was talking to and there was no one there, and he would continue to look up talking to someone. He did this until he was around 10, by then I'd had another little boy (Micah) and he to began doing the same thing. THEN it got to where my husband was having to work nights, I'd tuck the kids in bed and then go to bed myself, EVERY NIGHT I would hear footsteps come up the stairs and without stopping walk right up to the foot of my bed. The very first time this happened I assumed my husband had come home early, only when I turned over in bed to greet him - there was no one there. When my oldest son was two years old, we were in the kitchen getting ready to eat supper, and one of my cabinets fell on my son. Now, it COULD have killed him, but it DID break his femar bone right in half. He SAID his "friend got mad at him and pulled the cabinet on him, AGAIN, I was the only other one in the room. I woke up one night to my youngest screaming his head off, I went in the check on him, and he had three deep scratches across his face that he said "the shadow did". I started cursing this shadow thing or whatever he was talking about, then I

took him downstairs to clean up his wounds, and I put him in my bed after that. Around 4:15 am I woke up to a horrible burning pain on my left leg, I looked and it was burned almost down to the bone. So of course I had to go to the hospital, where THEY told me it looked like a chemical burn, I left it at that as I didn't want them to think I was crazy. I began talking to my husband about selling the house, as at that point I DIDN'T WANT TO LIVE HERE ANYMORE! My husband NEVER believed anything supernatural was going on, even with all the bizarre accidents going on around here UNTIL one night he and I were arguing over THIS EVIL HOUSE, and the more angry we got, the LOUDER THE TV volume would go up (that was the first sign TO MY HUSBAND THAT I WASN'T IMAGINING ALL OF THIS) HOWEVER, my husband started then accusing me of messing with metaphysical things I shouldn't be messing with (which I WAS NOT), and my husband came at me with his fist in my face, and our chair in the living room lifted up off the ground approximately 2-3 feet and then slammed down on its side. From that point on, my husband NOW believes us when we say something else is here, and THANK GOD, he's getting the house ready to sell or rent now. I've attached one of my photo's that I took on our stairway one night when I kept hearing footsteps walking up and down the stairs, and this is what I got.

I even had paranormal investigators come here one afternoon AND NONE OF THEIR EQUIPMENT could keep a charge. They kept opening up new battaries and replacing them, and they would only last a few seconds then shut off dead.So I'M SURE this house is haunted, but pretty soon we'll be outa here! The second picture I'm sending, I'm not quite sure what it is, but it hasn't appeared in any other photos.