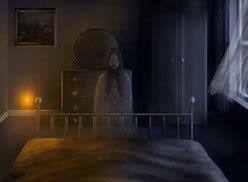 i was in my room going sleep then my guitar started playing and my mum and sister where sleeping so i just leave it .then i hear a bang so i shot up and there was a ghost staring so i put my head on my pillow and was freaked out. the next morning i texted my friend next door and told her everything. she then told me that she heard the bang too and then something came into her room and lay next too her mum i said i haven't lived in this house long or been told anything about it has anyone died or something here. suddenly she was cut off and wasn't texting me so i rang her then after 8 calls she answers and someone shouts help then she was cut off again.so i went to her house and asked if we could talk she said ok come in. so i went in and there came screaming from my house but nobody was in my mum had just left and my sister so i assumed it was the ghost. i got scared and ran and told my friends mum everything she said yea someone died on your front and nobody knows who it was all we know is that that boy who died who was a killer. REALLY we have to cope with someone in my house playing my guitar and screaming. then i see my mum in my front garden with a ghost coming up to her so i ran and brought her round my friends we all told her . she freaked more than we did and rang the police the police said that we had to move house so they could knock it down so the ghost wont ever come to you. that's where it started my mum said we are not moving so we stayed . that night i stayed awake nearly all night for about a minute i went sleep then i heared a noise so i shot up even more scared than ever looked at my tally flashing on and off then a figure in the tally with a peace of paper saying watch out. the thing is we lived near the woods and apparently if you go there at night there is a ghost who follows you home and haunts you. i will get you

there is the ghost again he is messing with my typing so if some of these are not spelt correctly i wrote them write but he changed it nobody else believed this but its true goobye and thanks for listening.